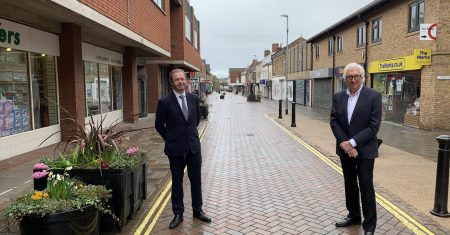 ONE Haverhill Partnership has announced a new chair after John Mayhew stepped down following almost five years at the helm.

Andy Hunter, headteacher at Samuel Ward Academy, will take over the voluntary role with Mr Mayhew remaining on the board, where he represents Suffolk Chamber of Commerce.

Mr Hunter said he was excited to be leading a partnership that includes representatives from health, councils, education, police, housing, voluntary, charity, business and more.

He said: “Since starting at Samuel Ward Academy, I have become aware of the important work of ONE Haverhill Partnership, bringing partners across many sectors together to make a real difference in our community.

“Of course, I am a champion for education, which has arguably never been more important. I see this as a valuable opportunity to form stronger links between schools, colleges, apprenticeship providers, employers and other community groups for all of our benefits.

“There is a clear sense of togetherness – where everyone works together for the good of Haverhill – and I look forward to working closely with all board members and everyone who wants the best for our town.”

ONE Haverhill Partnership is an independent strategic partnership that brings organisations and resources together to make them more effective and efficient in the town.

Mr Hunter is only the fourth ever chairman of ONE Haverhill Partnership – following in the footsteps of Anne Gower, Sarah Howard and Mr Mayhew.

Mr Mayhew, who became chairman in September 2016 and has been part of the board since 2014, said: “I look back as my time as chair with great fondness and a sense of achievement

“I have worked with some amazing colleagues who have supported me and together we have achieved some real change for people who live, work and visit Haverhill.

“I will continue to support the work of ONE Haverhill Partnership and I look forward to seeing the organisation grow and grow under Andy’s leadership.”

Over the last five years, ONE Haverhill Partnership has launched the LifeLink social prescribing project – now working across West Suffolk.

They have also championed the volunteering sector, the sixth form provision in the town as well as supporting businesses throughout the town with the formation of the Heart of Haverhill.