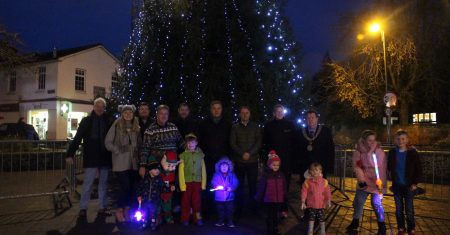 Haverhill’s Christmas lights have been switched on earlier than usual in a bid to promote festive business in the town.

An informal ceremony last Friday was held in the Market Square where families gathered to see the lights switched on by Haverhill mayor, Cllr John Burns, and nine-year-old Connor Steward, who won a fancy dress competition organised by Abbeycroft Leisure and Heart of Haverhill.

Cllr John Burns said: “I was delighted to turn on the lights with Connor.

Haverhill Town Council have once again done a fantastic job in making our town centre look so festive.”

The lights were turned on a fortnight before the popular Haverhill Family Christmas Night, which includes school choirs, the Haverhill Silver Band, fireworks, fairground rides and more than more than 40 stalls run by businesses and charities on the evening of Friday 6th December.

A Santa’s grotto will also reside in Queen’s Square while at the other end of town, the Royal Exchange will be hosting a mini beer festival with music outside 1 Accounts.

The evening has seen Haverhill Town Council work with Heart of Haverhill, a new group forged by ONE Haverhill Partnership to promote the town centre and encourage closer working among its businesses.

“Heart of Haverhill wanted to support those efforts by encouraging more businesses to join in the festivities as well as organise school choirs and the Haverhill Silver Band to perform.

“Businesses also told us that they wanted the lights to be switched on earlier this year and we would like to thank the Town Council for assisting with this request.”

This year’s late night shopping evening will also see more stalls come out into the High Street with the fairground moving to the Market Square – again at the request of local businesses surveyed by Heart of Haverhill.

The evening will once again finish with the ever-popular fireworks on the Recreation Ground.